The countdown has begun – in just over a week’s time the first novel in my new series, and under my new writing name, will be hitting the stores and beginning it’s own blog tour on the 19th March to coincide with its release. The Evil Within is the first novel in my Dark Devon series and is a supernatural crime novel. 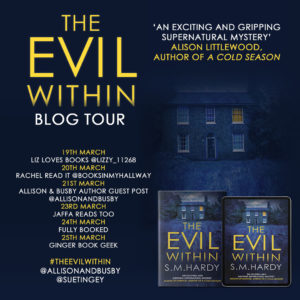 I have always had an interest in the supernatural and the occult, particularly the people who claim they can speak to the dead or connect to the other side. I also enjoy a good ghost story or tales of witchcraft and Satanism. Vampires, werewolves and re-animated corpses are also on my list of favourites. My writing over the years has tended to reflect this and I have a whole catalogue of different types of fantasy novels sitting on my hard drive, mostly unseen by anyone else but me or maybe my writing group.

The idea for The Evil With came from a subject that was as far from the world of fantasy as one could possibly be. At the time there had been a lot in the news about small businesses being financially ruined after having their loan and overdraft facilities inexplicably withdrawn by banks. This got me to thinking about what kind of person could do such a job and manage to sleep at night. Straightaway this gave me the background of my main character Jim Hawkes, a deeply troubled man with a highly pressurised job, which was turning him into someone he didn’t want to be.

The opening paragraphs came to me while I was in the middle of writing something else and rather than risk forgetting it I jotted down a few notes so I could go back to it later. Unfortunately it was almost as though my subconscious wouldn’t allow me to let it go and the story was calling to me. In the end I gave up on what I was writing and returned to the novel, which I had very inventively given the working title of “Ghost Story” although at this point I had no idea what sort of tale it was going to be.

I started typing away and the words flowed and pretty soon I was tapping the words “The End” and, as always, it was with a bittersweet sort of feeling. I was saying goodbye to the characters who had become real people inside my head. So, this was the end of Jim Hawkes and the residents of the imaginary village of Slyford St James – until one day I was chatting with my agent, Heather about my next novel and “Ghost Story” suddenly popped into my head. I gave her a brief pitch, she asked me to send it to her and a few months later she had struck a two book deal with the publishers Allison & Busby.

Just to give you a little taster and an idea of what “The Evil Within” is about I have included a brief blurb below.

On the brink of a breakdown, two years after the death of his fiancée, Jim Hawkes quits his high powered job in the City to rent a cottage in the Devonshire countryside. But Slyford St James is far from the peaceful haven Jim was hoping for.

Almost immediately he is plagued by strange occurrences: a combination lock that won’t open, loud noises in the attic of his new home and the figure of a little girl always just out of sight.

His new village friends, Jed and Emma, are convinced Jim has found his way to the village, and that specific cottage, to solve the mystery surrounding the suspicious death of a child. But as Jim is haunted by the ghosts of his past and endangered by a real-world threat in the present, it soon becomes apparent that true evil never dies.

The Evil Within is published by Allison & Busby and is due out on the 19th March 2020.