I was sent Along the Razor’s Edge by the author for an honest review and would recommend it to lovers of Grimdark and Dark Fantasy and anyone who likes a fantasy read that’s a bit different. 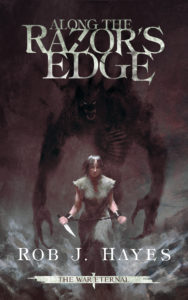 Eskara is little more than a child when she is plucked from her family and home by the emperor’s agents to be taken to the sourcerers’ academy. Here she is enrolled in a brutal training regime to become what is essentially a weapon against the empire’s enemies using her, perhaps unenviable, ability to conjure fantastical powers through ingesting magical “sources”.

The novel is written from the introspective point of view of the main character Eskara and she begins with the fall of the empire she and her friend Josef have been defending with devastating effect.  For their part in the last stand against the enemy army they are both taken prisoner and cast into a terrible place known as “the pit”, an underground mine where they will spend the rest of their lives in enforced hard labour surrounded by the worst of criminals. There are only three ways they can leave – to die, to defect to the enemy or escape – and there is only one of these Eskara will even consider.

Although not much more than a child Eskara, now fifteen, is very stubborn and sometimes acts impulsively and not always sensibly. The older and wiser Eskara, who is telling the tale often comments on her regret of not having done things differently and gives hints of the far reaching consequences of some of her younger self’s less astute actions and it is this that drew me in. These little asides by a woman who has quite possibly grown, through no real fault of her own, to be a monster. Eskara hints at some of the terrible things she has done, and also some of the terrible things that have been done to her, leaving me wanting to know more.

This novel is beautifully and skilfully written. The descriptions of the pit and the people in it are so cleverly woven into the story I never felt I was being swamped with descriptive information and yet I could almost feel the claustrophobia of being imprisoned in a place with no fresh air, daylight or sanitation and feel the despair of the prisoners.

Needless to say I can’t wait for book two and to see what happens to Eskara and this novel gets five big, fat stars from me!