The Evil Within
S. M. HARDY 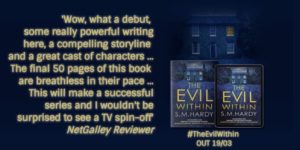 Allison & Busby Limited
11 Wardour Mews
London W1F 8AN
allisonandbusby.com
First published in Great Britain by Allison & Busby in 2020.
Copyright © 2020 by S. M. Hardy
The moral right of the author is hereby asserted in accordance with
the Copyright, Designs and Patents Act 1988.

All characters and events in this publication,
other than those clearly in the public domain,
are fictitious and any resemblance to actual persons,
living or dead, is purely coincidental.
All rights reserved.